Calcium is an essential trace mineral that helps in the metabolism of several minerals involved in the development of bones such as magnesium, boron, zinc and copper.

The name Calcium comes from the Latin word "calx” which means "lime" or “limestone” which naturally contains this essential mineral. The mineral was isolated by Sir Humphry Davy in 1807. [1]

The bones and teeth have the highest concentration of the mineral calcium in humans and animals and is also found in the blood, muscles and other tissue. It is needed mostly for bone formation however the mineral is also involved in other processes in the body. Calcium is controlled by the parathyroid gland which helps regulate the release of calcium in the bloodstream and reabsorption.

Calcitonin and Parathyroid hormones are responsible for calcium.

Parathyroid hormone (PTH), also known as parathormone or parathyrin is the hormone inside of the thyroid that raises serum calcium levels by pulling it from the bone. If the calcium level is too low parathyroid hormone is released to increase the level of calcium to a normal level and once the calcium reaches a normal level or is too high healthy functioning parathyroids will stop releasing PTH. [2]

Calcium is regulated by being stored in the bones and excreted via the kidneys.

Calcium is one of the key essential nutrient necessary for the development and growth of a healthy child into a healthy adult. It is most abundantly found in the bones and teeth. In the prime early years up to the age of 25 calcium contributes to the strengthening of bones. The process of aging can cause bone loss and increase the amount needed. The amount of calcium needed will be wholly dependent on various factors associated with health conditions, diet, age and even gender. Lifestyle also plays a huge role on how efficiently the body utilizes calcium such as alcohol intake and whether a person is physically active or leading a sedentary lifestyle.

Calcium is required by the body to prevent bone loss. Calcium deficiencies as well as other key nutrients such as magnesium and vitamin D can lead to various bone disorders such as osteoporosis which can be especially found in elderly people and also women going through menopause. In these cases calcium can help address the deficiency and maintain bone health.

Calcium plays a role in normal blood clotting (coagulation) working with vitamin K and a protein known as fibrinogen when blood is exposed to the air. Blood clotting is heavily reliant on Calcium and vitamin K which work synergistically to form clots. In a calcium deficient state where vitamin K is also low the blood clotting will take much longer. If deficiency is severe in any injuries involving bleeding may cause the person to bleed to death. The blood clotting process can be seen in wounds that form into scabs.

Some studies are showing that calcium may help lower blood pressure however these studies are also concluding that the hypertension lowering effects are more due to the mineral potassium. [4][5]

Calcium regulates muscle contractions and particularly important for the heart. Having sufficient levels of calcium helps regulate the nervous system and muscle function.  It is essential for the transmission of nerve impulses. It helps muscles to contract by assisting the proteins in the muscle when a nerve is stimulated which releases calcium. Once the calcium moves out of the muscles the muscles begin to relax. [6] [7]

Calcium can be found in many antacid tablet formulations by reducing stomach acid as they usually contain an alkaline form. Although this can be effective for indigestion caution should be applied as it can greatly reduce stomach acid and lead to digestive problems. Rennie is a popular brand of antacids which contains calcium carbonate and magnesium.

In addition to magnesium supplementation calcium is also another mineral that has shown positive results in those suffering from premenstrual syndrome. High sources of calcium include dairy products such as milk, yogurt, cheese and tinned sardines where the bones are also eaten. The best dairy to consume is organic as it also contains a heart healthy balance of omega 3 and 6.

One study has shown that a daily intake of 1,200mg of calcium can reduce PMS symptoms which includes emotionality, mood swings and physical symptoms such as cramps, bloating as well as fatigue. [8]

Calcium can help induce sleep as it aids the brain in utilizing tryptophan, an essential amino acid that helps the body’s ability to naturally manufacture melatonin. Dairy products such as cheddar cheese are abundant in both tryptophan and calcium which help aid in sleep.

Calcium has shown to be effective against teeth grinding which may be the result of a deficiency in this essential mineral in addition to Magnesium. Having sufficient levels of calcium and magnesium help regulate the nervous system and muscle function. Various minerals and vitamins work synergistically to reduce teeth grinding. In addition to calcium and magnesium, it is also important to have adequate levels of vitamin D3 which will help with uptake of magnesium and calcium. Having adequate levels of vitamin B5 has also shown to help reduce teeth grinding where the condition is caused by a deficiency in these minerals and vitamins. [9][10][11]

Calcium can be found in many plant and animal foods and in beverages. Calcium can be found in yogurt, cheese, milk, green veg, sesame seeds, pumpkin seeds, tofu, orange Juice, soy, beans, broccoli, fig, kale, molasses and nuts. Calcium is also found in fish where bones are consumed such as tinned salmon, sardines or pilchards. Some processed food are also fortified with calcium.

Most tap water found in cities are hard water and contain calcium minerals but a healthier option is bottled water since most tap water may contain other contaminants such antibiotics. Bottled spring water also contains trace amounts of calcium and amounts will vary in accordance to different brands.

Bone broth is also a source of calcium and particularly healthy for digestive system which helps with nutrient absorption.

Another source of calcium can be find in eggshell powder which mostly contains calcium carbonate. Calcium in the form of calcium carbonate is commonly found in nature such as in limestone’s, coral reefs, seashells as well as eggshells. However consuming eggshell powder means you may run the risk of food poisoning from the bacteria salmonella. This could be avoided through careful boiling of the eggshells, thoroughly dried and processed into powder form. Consuming large fragments should be avoided due to possible injuries in the throat and gut.

Calcium is available in various forms such as capsules, tablets and liquids. Calcium can help promote good sleep with a similar effect seen with magnesium however because calcium and magnesium compete against each other it should be taken away from magnesium supplementation.

A 2:1 calcium-to-magnesium ratio is the recommended rule which means for every amount of magnesium taken the calcium dose should be doubled, however nutritional profile is likely to be different for all individuals. As an example some people may suffer from calcification and require more magnesium than calcium.

Calcium may not be easily absorbed in the intestines and may require supplementation.

Some calcium supplements made from dolomite, oyster shells or bone meal may contain high levels of lead. [14][15]

Low levels of calcium is also known as hypocalcaemia. The following are some of the signs and symptoms of a calcium deficiency:

*Calcium deficiency may be a possible cause for teeth grinding (bruxism) as a deficiency can cause cramps or involuntary movement of muscles. Other possible deficiencies for the condition include a Vitamin B5 (Pantothenic acid) which plays a role in motor activity and another includes magnesium. Studies are showing those with bruxism often find their symptoms reduced after supplementation of these nutrients.[16]

*Laryngeal spasm will lead to difficulty in breathing

*Chvostek’s sign is a clinical sign of tetany which is the twitching or spasm of the facial muscles in response to stimulation by tapping over the area of the facial nerve. [17][18] [19]

*Trousseau’s sign which is another clinical sign of tetany can be seen in people with low levels of calcium (hypocalcemia). This sign is observed using the test of placing a blood pressure cuff around the arm and inflating to a level exceeding systolic pressure for 3 minutes. If the sign is produced this positive test is seen as hypocalcemia and hypomagnesemia. This sign is shown below in Figure 1. A Positive Trousseau’s sign indicating hypocalcemia. 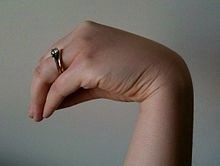 Causes of low levels of calcium (hypocalcemia) include:

Hypoparathyroidism is where the parathyroid glands, which are in the neck near the thyroid gland, decreases parathyroid hormone (PTH) activity which causes inability to move calcium out of bones. This can also increase levels of blood phosphorous (hyperphosphatemia).

*Anti-inflammatory medications, known as glucocorticoids prescribed for asthma can decrease calcium absorbed from food. They also can reduce calcium from kidneys and decrease bone formation as well as losing bone density.

*Corticosteroids can hamper the production of sex hormones in both women and men and cause bone loss as well as bone fractures. [22] [23]

Estrogen helps with intestinal absorption of calcium and calcium metabolism and low levels of this hormone can reduce calcium levels. Estrogen deficiency and low calcium levels can be found in postmenopausal women, however low levels can cause bone loss in both sexes. Low BMI may play a role in this as those who have low body weight such as individuals with anorexia nervosa have low levels of estrogen.

Vegetarians and vegans may be at risk of low calcium intake if oxalic acid and phytic acids are present in many of the plant-based diets. Individuals who have an allergy to dairy and lactose intolerant may have less calcium in the diet which can lead to deficiency.

The following are health conditions associated with calcium deficiency:

*Some studies have shown that women with PMS symptoms during luteal phase (from ovulation to the onset of menstruation) have an underlying calcium dysregulation with a secondary hyperparathyroidism and vitamin D deficiency. [24] [25]

Too much calcium in the body is known as hypercalcaemia. Signs and symptoms of hypercalcemia include:

*Kidney stones is a condition where salts and minerals form into stones in the kidneys or urinary tracts. This condition is often marked by pain which can range from mild to severe. Kidney stones symptoms usually manifest as a pain between the back and upper abdomen on one side due to kidney stones.

Causes of high levels of calcium (hypercalcemia) include:

Cancer is one of the most common cause for elevated levels of calcium. Cancers that may cause hypercalcemia include cancer of the lungs, head and neck, kidney, breast, gastrointestinal cancers and multiple myeloma. Metastasis which is when cancer spreads to the bones also increases the risk of hypercalcemia.

Treatment of hypercalcaemia is usually dependent on the calcium levels where mild hypercalcaemia may simply require observation of bones and kidney function.

The following are some treatments and medications that doctors may recommend:

Calcitonin (Miacalcin) a hormone derived from salmon controls calcium levels in the blood. Taking this hormone may be accompanied by nausea. This hormone is also produced by humans in the thyroid gland. [26] [27]

Prednisone a corticosteroid, which the body naturally produces to fight illnesses is a prescription drug used to treat inflammation but also used if hypercalcemia is caused by high levels of vitamin D. [30] [31]

Bisphosphonates and Denosumab (Prolia, Xgeva) is used to treat people with hypercalcemia caused by cancer. [32] [33]

In the case of emergencies with extreme levels of calcium IV fluids and diuretics are likely to be used.

Precautions should be taken when using laxatives or antacids containing Calcium as well as some medicines that are taken over a prolonged period of time as this can increase calcium to a toxic level. [34]

People with kidney disease should take more caution when supplementing with Calcium as they are at higher risk of hypercalsaemia.

Caution should also be taken by individuals with heart disease and gastrointestinal disorders.

Calcium supplements can interact with some drugs and it is recommended to check with your doctor before supplementing.